Flying by the seat of my yoga pants

I cannot believe it has been so long since I've posted, but seriously... I am sort of busy around here. Life is wonderful and amazing with four children in our home! All of our boys are so very healthy and happy, and our three-year old is adjusting to the new life. My husband, mom and I are all getting used to sleep deprivation and wander around like cheerful zombies.

People have asked questions about life since our triplets' birth and I thought it might make a nice and organized blog post, since my mind is a bit mushy lately. A thoughtful narrative post will follow, most likely some time around the new year.

How is the Lion?

Our little Lion! He is an amazing boy whose body is healed, who astounded his doctor's with "the mildest case of NEC" they've seen. He managed to quickly recover, thanks to the highly skilled staff at the NICU. His seven days "NPO" (without anything by mouth) were brutal. Although he was getting IV nutrition, he cried often and his tummy was audibly rumbly. My mom, husband, mother-in-law or I always stayed the night with him while he healed. We never wanted him to feel empty and hungry and not have one of us there. While the Seal and Elephant were home (4 days before Lion), life was crazy! We only had two adults to do all the newborn preemie care and feedings and care for our daughter, while one of us was at the hospital. Thankfully, Lion was only a bit behind his brothers and after he was allowed to eat, he caught up so very quickly to them! Since he's been home, he eats like a champ with his brothers and is getting much better at nursing. He usually latches on and falls asleep, though, and requires foot-tickling and such to stay awake.

I know I will always watch him more carefully, paying special attention to his cries and behavior. I examine each diaper for traces of blood- I have no doubt this habit will go on for months. I promised him when he was in the hospital that he'd always have dessert first- he earned it during his days of being hungry. We could not be more grateful knowing that many babies are not so lucky and have major ramifications from this awful disease whose cause we know little about. Our Lion was a lucky boy, and we are so glad his body fought the infection with so much strength.

How big are the boys?

Lion is about 4 pounds, 14 ounces, Seal is 5 pounds, and Elephant is living up to his name at 5 pounds, one ounce! They've all had their first "well child" visit and their pediatrician is very pleased with each of their growth.

Pull up a chair and grab a latte- this may exhaust you.

5 AM: Feed babies! My mom and I usually do this one together while my husband sleeps. It is a "super bottle" feeding where the breast milk is fortified with a preemie powder for lots of extra calories.

6 AM: Pump. I always have to wash one of my two sets of pumping parts after this. Our daughter usually wakes up in this hour, too.

7 AM: Make bottles for the day, do some sort of household chores. My mom is always on top of this, too.

8 AM: Feed babies! This time, we add vitamins and iron to a bottle of breast milk and I nurse one of the three. Depending on who is nursing, we have to give them a bit more breast milk in a bottle.

9 AM: Pump. Play with our daughter if she is not at school.

11 AM: Feed babies! A super bottle again, and I nurse one.

12 PM: Pump. Household stuff or play with A.

2 PM: Lunch for the people in the house over a month old, if we are lucky. Usually a handful of trail mix or veggies and hummus. (In fact, I just found a cashew in my bra.) We tend to graze when we feel like we might pass out.

5 PM: Feed babies! Again, a fortified bottle for two and I nurse one.

8 PM: Feed babies! More vitamins and iron and I nurse one.

11 PM: My husband and my mom do this one while I sleep unless A wakes up (as she has been) or I am needed.

5 AM: Return to beginning and repeat!

This is infinitely easier when we have an extra adult (besides my mom and I) so when my husband is home, it is much better, and my wonderful mother-in-law was here for a week, but for the most part, we will be on our own. My sister-in-law will be here for five days later in the week and that is the end of our "planned" helpers. Then we will be at the mercy of our friends and family who will come help feed, hold a baby, play with A or fold laundry.

It is a wonderful joy to feed my babies from my body. When A was an infant, I struggled to get her to latch on, and used a nipple shield for a couple months, then nursed her for 15 months. I loved every nursing session with her and do not think I ever felt closer to her. The initial frustration of trying to get her to latch on, stay awake and eat enough so that she was not hungry again 90 minutes later felt like it would never get better. Slowly, her latch improved and she was able to eat more quickly with less fuss.

In the hospital, I was able to nurse the boys for a maximum of 3o minutes, and they were weighed before and after each feeding. Sometimes they got their whole feed, sometimes only a few CC's. Through all of it, I have pumped every three hours, around the clock, telling my body to make enough milk for three. So far, I am able to keep up with what they need, as long as I drink insane amounts of water and take Fenugreek to boost the supply a bit. It is not my favorite pastime, pumping, but I am figuring out the tricks and am usually able to pump 5-6 ounces per session, for about 40-50 ounces per day.

Trying to give each boy a good chance to nurse and help them "learn" to latch on, stay awake and take in enough are similar problems to how my daughter's nursing began. However, then I had ONE baby to teach and work with and I would put her to the breast about every 2 hours during the day. She had many more chances in 24 hours than her brothers do. I try to nurse one baby at almost each feeding (the nights I don't) and then sometimes they need a bottle of breast milk to finish. Seal could just nurse, I am convinced. He latches on without the shield and does a great job of getting my milk to let down. Lion, who does not latch well, is the most efficient eater and is usually done very quickly. Little Elephant has the hardest time latching on and gets frustrated. I just keep working with him until he is latched, but he is often wiped out after all the efforts and doesn't get much milk since he passes out quickly.

Ultimately, my goal is to nurse two at once at each feeding while the third one gets breast milk in a bottle (or formula if necessary) and right now that feels so very far away. I know it's ambitious to expect a preemie to "get it" so quickly, so I try to take heart in what both my pediatrician and lactation consultant said: That (a) they will be much stronger nursers by their due date and (b) the most important thing is to give each practice while maintaining my pumping schedule. I just expected it to come more quickly and for it to be easier to get them off of so many bottles. A very small concern compared to what can happen with preterm triplets, but it is something that is a very important goal for me. The always-wise Dr. Sears says in his “Premature Baby” book that to teach preemies to breastfeed, you need the two P's: Patience and Perseverance. I think he is right once again.


Here are a couple of pictures of our trio, settling in at home.

Snuggled in their Boppies; second favorite only to being held. 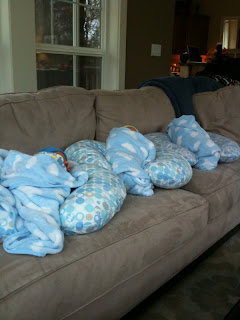 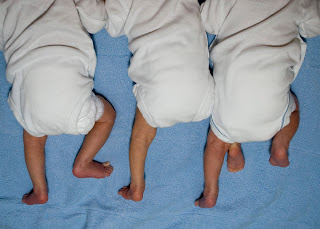 Our Lion is healed.

Our three beautiful boys are at home with their family.

I cannot tell you how much each comment and thought meant to us as we got through the most wondrous and terrifying week.

I will post tonight, though it may not be coherent.

My heart is swollen with love and gratitude.
Posted by Carrie at 10:49 AM 36 comments: